The door to Brenda Schoenfeld Now, adorned with a tumbaga salamander, had not even swung closed before Brenda Schoenfeld herself was embracing my 8-month expectant belly, exclaiming, “I love life!” in her Mexican accent and calling her pregnant staffer, Kayla, over to meet me. Another woman appeared to my left, presenting me with a hammered-silver goblet of ice water on a silver tray. I was just a stranger walking in off the street on a Thursday afternoon. Suddenly, I felt as if I had crossed the threshold into a fabulous dinner party, surrounded by fabulous artifacts collected by my fabulous host.

I imagine it was this effervescent presence that made Brenda’s first boutique, Brenda Schoenfeld Dallas, a popular Lovers Lane destination when it opened in 1990. And also why the shop was not able to survive when she left for Italy with her young son and then husband (oilman turned art historian Robert Edsel) on a yearlong sabbatical in 1995. That year turned into almost two decades in the Florentine Hills. Yet before Florence, before Dallas, there was the village of Taxco, Mexico, Brenda tells me, now seated across a heavy oak table in the center of her store.

She was born into a family of artisans. Her mother worked with her grandmother, a fashion designer by the name of Tachi Castillo, who dressed Frida Kahlo and created the “Mexican wedding dress,” a beloved boho design in the ’60s and ’70s. Brenda spent much of her time at the famed workshop of her four uncles, Los Castillo, which made fine silver housewares and custom pieces such as door handles for the Rockefellers. (As for the Schoenfeld surname: Brenda’s father was a German horticultural engineer who stopped in a gift shop while passing through the village, met a beauty with great legs, and never left.)

After graduating from TCU, Brenda set out to make a name for herself, working retail in Dallas while also trying to get a wholesale operation for her own silver jewelry and belt buckle designs off the ground. “I was literally going door to door to stores saying, ‘Hi, would you like to look at my line?’ ” Brenda recalls. “I would wear the belt and everything, and they would say, “I like your earrings. Where’s your showroom?’ I said, ‘Right here!’ ” Within a few years, her Taxco-​crafted accessories line was sold at 2,000 stores around the country, including Neiman Marcus and her own Lovers Lane shop.

While raising her son in Florence, Brenda learned to work with gold, and she invited private clients to view her jewelry at the villa she personally designed down to the custom glassware and linens within it. She returned to Dallas two years ago to care for her cancer-stricken father. Through those days of illness, Brenda’s father kept saying, “You need to open back your store, mija. You need to be close to your friends. Texas loves you, and we love Texas.” She listened.

This second iteration of Brenda’s boutique is a reflection of her life. There are silver housewares made by her cousin Emilia Castillo and Castillo’s daughter Cristina Romo, who now employ the next generation of silversmiths on their family’s lush Taxco compound; caftans and pillows designed by friends she’s made through the years; a small section for babies, because, as I quickly learned, she loves children; and, come to life via her own sketches, jewelry, glassware, linens, cashmere sets, little girls’ dresses, and leather bags, most of which are made in Italy.

Brenda’s intention in Dallas is to share the Italian way of shopping: invest in an exquisitely made set of sheets and keep them for decades. She also hopes to reverse the current course of retail. “I want people to come in and have an experience. It’s not the same on the internet,” she says. “We need to bring back the tangible thing. You see it, feel it, touch it. We cannot lose sight of having that personal connection.”

Before I leave, she insists I return with my newborn. 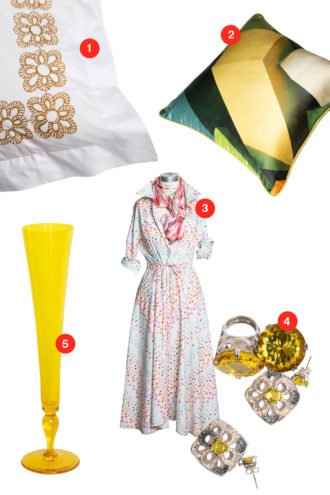 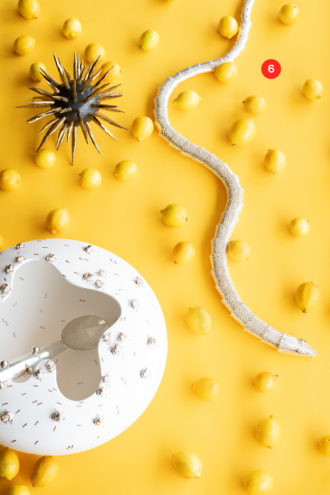 1. Brenda still uses the custom linens she had made in Italy 23 years ago and has similar ones made for her store. For these Egyptian cotton linens, it takes a craftsperson 18 minutes to hand-embroider each of the flowers. Brenda Schoenfeld Alma collection king sheet set, $3,600

2. Painter Susi Bellamy and Brenda became friends when their kids attended the same school in Florence. After Bellamy moved back to London, she began designing a line of ultra-graphic wallpaper, pillows, lampshades, and makeup bags. Susi Bellamy kaleidoscope pillow, $165

3. Brenda grew up playing with Antonio Sersale when his family would spend summers on a nearby ranch in Taxco. He and his wife, Carla, own Le Sirenuse hotel in Positano and make textile goods stamped with local motifs. Le Sirenuse flowered dress, $396

4. Most of Brenda’s jewelry is made in her own workshop in Florence. She calls the effect on these pieces graffiato (i.e., scratched), which is achieved by using a chisel to hand-etch each line. Brenda Schoenfeld Alma sterling silver and faceted-glass ring, $350, and earrings, $520

5. The shop’s signature shade is a citrus yellow, inspired by the American lemons Brenda says her father introduced to Mexico and the plentiful lemon trees of Italy. Brenda Schoenfeld Now Champagne flute, $140

A Mom’s Guide to Living Stylishly

Keep me up to date on the latest happenings and all that D Magazine has to offer.