Episode 9 of Style Network’s Big Rich Texas begins at Leslie’s partially furnished rental where Whitney and Tyler are curled up on the sofa in the middle of the day, surrounded by empty liquor bottles. Leslie, freshly showered and exuding a sense of productivity, urges the couple to get the Hell up.

Next, we’re at Pamela’s house where her husband, Ignacio, has traded in his paintbrush for a pair of clipping shears. He’s listening to 18 year old Hannah whine about not having enough “Hannah time” as he snips individual stems and places them in a crystal vase.

Pamela enters and instead of telling Hannah to shut up, she agrees to let her hire an assistant to lighten the work load. Hey, how about Ignacio? He could probably do the job and still squeeze in some floral arranging time.

Meanwhile, Kalyn and Leslie are cruisin’ in the Vette with the top down. They’re on their way to meet Bonnie at Highland Park Village, a good 30 minute drive on the interstate in 90 degree heat. 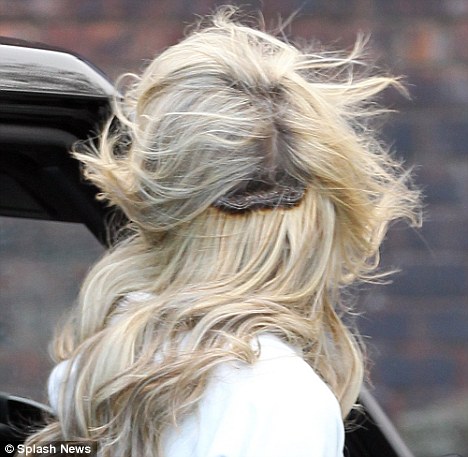 After the makeup crew picked the bugs out of her lip gloss and replaced her hair extensions that blew off somewhere in Grand Prairie, Leslie mentions to Bon that she’s ready to buy a house. Apparently Connie’s ex-husband, John, has offered to connect Leslie with his realtor.

Cut to the couch interview where Bonnie tells us, “Everyone knows John Dieb, he doesn’t have the only intention of taking her house hunting. He’s got his eyes set on a different piece of property.”

For clarity, Whit chimes in, “Yeah, her a**.” And like any good mother setting an example for her daughter about the art of being a lady, Bonnie agrees, “He wants to nail that.”

Bon and Leslie browse the boutique while Bon shares that she is sad about only seeing Whit when she comes around asking for money. Leslie suggests cutting her off.

Back to the couch of dysfunction where Bonnie tells us, “We’re like best friends and then Tyler came along and she dumped me. I mean, who would dump their best friend for a guy?”

Bon, the more important question is this: Why don’t you get a best friend you’ve never diapered? Or given birth to? It’s weird.

We need a change of scenery featuring someone who can parent. Like Melissa.

It looks like the starvation diet combined with unsafe hormone injections turned out to be a good career move. She’s a size 4 now, no longer a plus-sized model.

So she brings Maddie along to a fitting and uses the gig as a teaching moment: If you reach for the stars, Maddie, and suck in really hard, you can wear a Barbie dress and get your picture taken.

OK, so the dress tore a little bit but Melissa is confident, “In two days this is gonna fit.”

Two days? You gonna have your internal organs removed for the shoot? Seriously, I wouldn’t do that for anything less than Gucci.

Bon is at home typing away by candlelight when Whitney enters, slams her hands on the desk, and tells her best friend she needs money. That tactic didn’t work so she resorted to making loud noises and banging on the keyboard, promising to stop only if Bon gave her some cash.

But Bonnie isn’t giving in to the childish behavior, “I will provide you with food and shelter while you’re in school. There’s food, you’re in a shelter.” This is a good start Bon, but you might add something about shacking up with her boyfriend, drinking all day, tattooing herself with the c-word, and acting like a toddler. Think about that while we roll our eyes at Melissa a little more.

Next, we join Connie, Grace, Melissa and Maddie at Urban Taco where Melissa is just sniffing the food because she needs to lose half her body weight in 48 hours. She assures us that smelling the food is very satisfying, she even takes a whiff of the chips and salsa and begs them to order dessert so she can put her nose in that too.

Over at Woodhaven Country Club, Hannah tells Whit that her mom needs an assistant and since Whitney can’t seem to find cash in the couch cushions at Tyler’s house or at the bottom of a whiskey bottle, she takes the job adding, “And it’d be perfect because my mom would be pissed.”

Yeah, but driving to Plano to work at Pam’s house surrounded by blonde wood cabinetry? I’m not sure that’s worth the thrill of seeing your mom squirm.

Oh there’s Duarte in her evil lair now. She tells us, “Let’s face it, the apple doesn’t fall far from the tree and in this case, the tree is pretty effed up.” Good point Pam, but for Hannah’s sake, I hope you’re wrong because speaking of effed up…

Pamela, do you have a degree? I bet you don’t I’m sure you do, I just wonder from where and in what? You know how to reach me, send the proof and I’ll post it. We’ll let readers vote on whether you have trashing rights. I look forward to hearing from you again. But no f-bombs and watch your punctuation, K?

Next, John Dieb pulls up in his Aston Martin. He’s meeting Leslie and her Vette to introduce them to his real estate agent.

Seems John could have just given Leslie the phone number for the realtor but apparently nothing says “Welcome to Texas” like joining in the entire process of touring homes and observing price negotiations with a mere acquaintance. Leslie thought the first house, priced at about 3.2 million, was nice but she really wants more than 5,000 square feet and it needs to be a home she can name. I guess like Graceland or something? Leslie, I’d reconsider, think about what happened to Elvis. He named his house and then got fat and died. Just sayin’.

Back at the club, Kalyn tells Grace and Maddie she’s being cyber-bullied. She said it also happened before she moved to Dallas, “Some girls said they were going to jump me, I had people come to my house a few times and knock my mailbox over and throw things at my house.”

Kalyn, I’m not minimizing the bullying thing, it’s wrong. But your previous perpetrators were from Apple Valley. In Dallas, even the bullies have a little more class. I feel strongly that your mailbox will weather the storm. And Leslie is looking at huge houses behind gates. Without a rocket launcher, your bullies won’t be able to get debris past the first row of hedges.

And as a side note, I’m not sure if you’re aware that Bonnie is in the market for a new BFF. Frankly, an 18 year old confiding in two 15 year old girls is a little lame. So call Bon, K?

But Grace wants to be there for Kalyn because, “We’re practically related.” Grace, she’s the new goddaughter of your mom’s distant cousin by marriage that she hadn’t seen for 20 years prior to filming. You’re not related. Not even practically. But Kalyn is lucky to have you and you’re the best non-relative, age-inappropriate pal ever.

Next, Whit continues to fail as her mom’s BFF by showing up at Bonnie’s to get clothes, announcing she has taken a job with Evil Enterprises of Collin County or as Bon would say, “Franken-Pam.”

Bonnie: Well your boss is Satan. I guess that means you’re Satan’s *itch.

In all fairness, Bonnie missed the part where Ignacio was arranging flowers, so she didn’t know Satan already had a *itch. But being Satan’s assistant is pretty bad too.

Next up- Leslie and John are at an awkward dinner sending mixed messages and discussing the property search. Leslie tells him some of the houses were too small and with an I’m-not-talkin’-about-houses look she says, “The bigger the better is what I say.”

John lets an uncomfortable, boyish laugh escape and says, “Uh, OK, I’ll remember that.” Then a few more flirtatious seconds pass before he says, “Why don’t we get dessert to go?”

Leslie: To my house?

John: To my house.

Leslie: Well let’s eat half of it here.

Anyway, the chocolate peanut wontons are delivered to the table and Leslie puts her finger in the plum sauce and licks it off.

Leslie: Is that nasty?

John: I thought you could stick it in my mouth.

Leslie: No, I was going to eat it.

John: I’ll stick my finger in yours.

The discomfort is paralyzing but John doesn’t seem to mind and hollers to any waiter who can hear him, “Do you have any whipped cream?”

We can’t take it anymore. For the love of God, please stop.

Over at Duarte’s house, it’s Whitney’s first day. Hannah, Pamela and Whit sit down for new employee orientation. Hannah begins, “I’ll show you around the office, then we’ll need you to pick up some dry cleaning, maybe get some coffee and we’ll have you get us lunch.”

I would have had her start with locating a decorator because this meeting is being held in a living room with builder grade wall-to-wall carpet, a Victorian black and gold floral sofa, a fringed chaise lounge, and a coffee table that looks to be straight off the Cantoni showroom floor. While I hope Pam was at least striving for an eclectic mix of vintage and modern, she ended up with what I’d call “old lady who shops at Freed’s and will eventually have 18 cats.”

But Whit has been tasked with more pressing matters like getting a milkshake for Hannah. I hope she has a mini-freezer in her Hummer because she’s just pulled up to Highland Park Pharmacy, easily a 35-40 minute trip one-way.

Then another of Style Network’s tricky transitions takes us on a fuzzy ride from Jimmy Choo to Connie’s used couture shop in Uptown where sweet Grace is telling her mom about Kalyn being cyber-bullied. She tells her mom that she and Maddie are going to cheer Kalyn up and take her out on the town.

Sounds fun, Grace. Where? Shopping? A great dinner? Oh, the rodeo. I don’t know but Kalyn might rather sit at home and read the harsh Facebook comments that she clearly doesn’t realize can be deleted or stopped all together by simply unfriending the mean people.

But as it turns out, seeing men get thrown from raging bulls is just what Kalyn needed.

Back in Plano, Whitney is tired of being the errand girl for Satan’s spawn and like a grown up trying to make it on her own, she quits abruptly.

Then Style sets up the cliffhanger for next week’s finale.

Over lunch at Woodhaven, Leslie tells the ladies she’s been looking at houses with John Dieb’s help. Pam refers to John as Connie’s “sloppy seconds” and Melissa is so stressed that she eats a French fry.

On the couch, Pamela listens to herself talk, “I don’t care for Leslie. I think she’s a liar. And I don’t appreciate her coming into my community and my country club with her big grand lies and I definitely plan on exposing her for that.”

With only one episode left, Pamela better expose fast.

Catch up with all our Big Rich Texas recaps here.

Never miss out on arts and entertainment events in Dallas with our FrontRow newsletter.